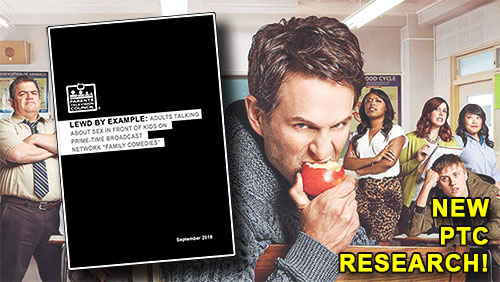 New research by the Parents Television Council reveals a disturbing trend occurring in prime-time broadcast family comedies – adult characters (parents and teachers) are increasingly making explicit references to sex in front of child characters.The PTC’s new study, “Lewd By Example,” found that over 80% of all prime-time broadcast network family comedies contained instances of adults using explicit sexual dialogue in front of children. The worst example in this study is NBC’s A.P. Bio, which features a disgruntled school teacher discussing his sex life, or using other sexual dialogue inappropriate for children, in front of his classroom in nearly every episode. Watch content examples from the study below. “When it comes to airing sexually charged dialogue in front of children, the broadcast television networks eagerly appear to be saying ‘me too’ when they could be saying ‘#metoo.’ According to new PTC research, over 80 percent of the ‘family comedies’ on prime-time broadcast TV include adult characters using sexually explicit dialogue in front of child characters -- this coming at a time when our nation is grappling with a crisis of inappropriate sexual provocation. Furthermore, the networks are marketing this alarming content trend as being appropriate for children to watch,” said PTC President Tim Winter. “Our study reveals a fundamental problem with the way TV shows are rated. Each TV network assigns its own ratings, and oversight of the system is then handed to a group of the very same network executives who routinely rate programs inaccurately. It’s a dirty secret that the networks would lose advertising revenue by rating content accurately, because most mainstream corporations won’t sponsor programming rated TV-MA. The TV Content Ratings System needs to be reviewed by the regulatory authorities and entirely overhauled. “Decades of scientific research has concluded that children and teens are profoundly influenced by what they see and hear on television. Yet today, primetime television places young characters directly in the midst of sexually-charged dialogue, and that content is marketed as appropriate for children to watch. The system that is supposed to ‘protect’ children by giving parents control over explicit, age-inappropriate content is an abject failure.” METHODOLOGY Prime-time broadcast network programs on the five major networks (ABC, NBC, CBS, Fox, and the CW) were digitally recorded. Using the Parents Television Council’s proprietary Entertainment Tracking System software, PTC analysts documented and analyzed each instance of adults using sexual dialogue during family-themed prime-time broadcast network programming in which children play a significant role, during the 2016-2017 and 2017-2018 season “sweeps” periods (November 2016, February 2017, May 2017 and November 2017, February 2018, May 2018). Surveyed were a total of 332 episodes of family-themed situation comedies, for 184 hours of programming. PROGRAMS SURVEYED Prime-time broadcast network situation comedies (“sitcoms”) analyzed for the study included: