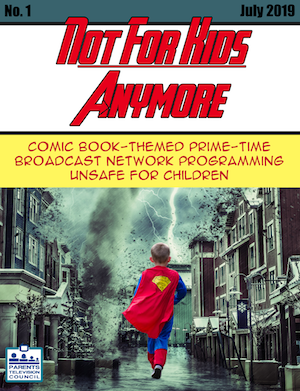 LOS ANGELES (July 30, 2019) – In a new seven-year analysis of comic book-themed broadcast television shows with appeal to children, the Parents Television Council found that young viewers were exposed to over 6,000 incidents of violence, over 500 deaths, and almost 2,000 profanities, among other adult content.

“How far has comic book content fallen? Far enough that Archie is now having sex in the backseat of a car with his high school teacher, Miss Grundy. And keep in mind that this is on broadcast television. Beheadings, profanity, illegal drug use, and even scrotal references are now the norm,” said PTC President Tim Winter. “Children are inherently attracted to comic book characters; and parents who grew up with those characters won’t recognize them today, given the steady flow of extreme violence and adult content saturating comic book-themed programs. Instead of goodness we have darkness; instead of virtue we have violence; instead of innocence we have debauchery. It is distressing that broadcast TV shows based on child-beloved comic book franchises are not safe for kids to watch.”

“As an avid, life-long fan of comic books, I was shocked to see the frequency of violence, death and profanity that is found in current comic book-themed TV shows with appeal to children,” said Dr. Christopher Gildemeister, head of research operations for the PTC, and the author of the study. “Gotham, centered around Batman’s childhood, showed bloody decapitations and dismemberment. Arrow showed the hero committing murder, as well as being tortured. Archie’s reputation is of clean teens having wholesome fun - not having kinky sex with each other, doing drugs, and being stalked by serial killers, as seen in Riverdale.”

“Ask any young child who their hero is, and you’re likely to hear a character’s name from a comic book because Hollywood markets these characters to them from birth through TV shows, movies, video games, and toys. Big-screen movies about comic book characters are marketed to kids to ensure a large audience, and generally-speaking, are safe for kids – and less violent than the current slate of TV shows with the same characters,” said Gildemeister. “But a bait-and-switch happened in 2012 when broadcast networks started adding more comic book-themed TV shows to their lineup, they made them replete with content inappropriate for, and even potentially harmful to, children and teens. It doesn’t have to be this way.”

“Thankfully, our study shows that Supergirl and The Flash are the ‘safest’ for kids to watch and serve as good examples for the broadcast industry to emulate,” Gildemeister added.

In this research report, the PTC examined comic book-themed prime-time programming on the major broadcast networks during November, February, and May “sweeps” periods from November 2012 through May 2019. Programs examined were Fox’s Gotham; CW’s Arrow, Black Lightning, The Flash, Supergirl, DC’s Legends of Tomorrow, and Riverdale; and ABC’s Marvel’s Agents of S.H.I.E.L.D., Marvel’s Agent Carter, and Marvel’s Inhumans. This resulted in a total of 293 episodes, and slightly more than 300 hours of programming analyzed (a few episodes were two-hour specials).

• In comic book-themed programming with particular appeal to children, young viewers were exposed to over 6,000 incidents of violence, over 500 deaths, and almost 2,000 profanities.

• The most violent program was CW’s Arrow. Young viewers witnessed 1,241 acts of violence, including 310 deaths, 280 instances of gun violence, and 26 scenes of people being tortured. They also heard 492 profanities.

• Fox’s Gotham featured 35 explicit, gory scenes of beheading or dismemberment, 144 deaths, 13 scenes of torture, and over 1,100 acts of violence.

• The CW series DC’s Legends of Tomorrow included 77 instances of sexual content, 785 instances of violence (including 67 deaths and 11 scenes of torture), and 368 profanities.

• Violence on the Disney-owned ABC network programs Marvel’s Agents of S.H.I.E.L.D., Marvel’s Agent Carter, and Marvel’s Inhumans included a combined 1,194 instances of violence and 115 deaths. Also heard were 254 profanities. Most episodes of the ABC series were rated TV-PG.

• The CW’s series Riverdale, based on Archie Comics, featured 78 instances of sexual content, 242 instances of violence, 153 profanities and scenes of casual drug use – especially disturbing, since every main character in the series (including Archie, Jughead, Betty, and Veronica) is a teenager still in high school.

The full report, along with images for download, can be found here. Video clips with examples from the study can be viewed here.