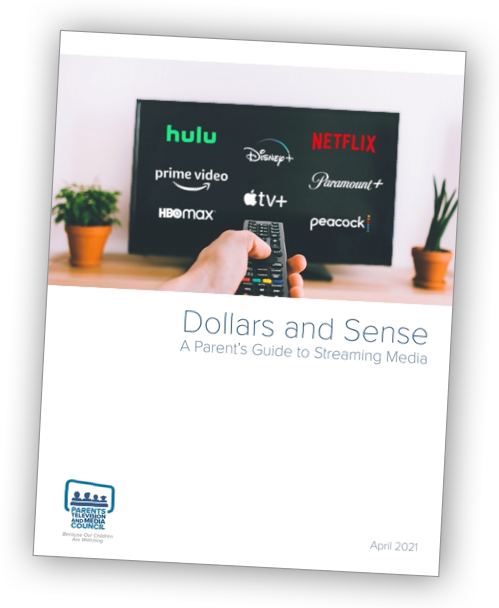 LOS ANGELES (April 20, 2021) – The Parents Television and Media Council (PTC) released a new study evaluating the most popular streaming services, finding that advertiser-supported streaming services like Paramount+, Peacock, and Hulu are the most cost-effective, but Hulu has the worst parental controls while Netflix has the best.

The PTC report, Dollars and Sense: A Parent’s Guide to Streaming Media, compared both the economic and non-economic impacts associated with the myriad and most popular streaming media platforms.

“With streaming increasing in popularity, due in part to increased screen time because of COVID lockdowns, families need to know which services will be most cost-effective. But they also need to know which services will best protect children from harmful content. Our report evaluates the most popular services for both price and parental controls,” said PTC President Tim Winter.

“While our study found Paramount+, Peacock, and Hulu to be the most cost-effective streamers, those same services do not provide robust parental controls or enough distinction between age-appropriate programming. In fact, we found Hulu to be the worst of the various platforms for parental controls, even failing to distinguish between content that would be suitable for a 7-year-old versus a 13-year-old. Given that Hulu is owned by Walt Disney, we were surprised and disappointed that it didn’t have better parental controls,” Winter said.

Families turn to streamers because they can take advantage of cost-savings by cutting the cord on cable television, Winter noted, but cautioned, “Streaming content can be far more explicit than what most families are used to from broadcast and cable. Plus, given the push from media conglomerates to re-bundle content, it’s anyone’s guess as to whether streaming will remain cost-effective.”

For parents who are working tirelessly to protect their children from age-inappropriate content, the challenge has never been greater, said PTC Program Director Melissa Henson. “It is no longer a matter of knowing what is on a handful of broadcast or cable networks during a given time of day. Launching Netflix, Hulu, Amazon Prime Video, or any one of dozens of streaming apps gives a child instantaneous access to a virtually unlimited catalogue of programming,” Henson said.

“We are encouraged that Netflix has made significant improvements to its parental controls, including allowing parents to block specific programs, since our last report on streaming TV. But Netflix can and should continue to make even more improvements, including giving users the ability to block entire categories of content. Disney+ remains the best alternative for families with young children looking to exclusively stream family-friendly content,” Henson said.

Winter concluded, “The findings of this new research report demonstrate an urgent need for improvement on the part of the streaming providers, and for regulatory action by those with relevant oversight. Specifically, the Parents Television and Media Council is calling on all streaming providers to develop and adopt industry best practices for robust parental controls; calling on the Congress to pass a legislative update to the Family Movie Act of 2005, so families can filter out explicit and age-inappropriate content; and calling on the FCC to revisit and renew the promises Congress made to families when it passed the Child Safe Viewing Act of 2008.”

For this report’s economic analysis, the PTC looked at both the up-front and hidden costs a family would pay by “cutting the cord” and switching to a streaming-only solution consisting of the most popular streaming services currently on the market. For the report’s non-economic analysis, the PTC reviewed the parental controls available on those most popular services.

Although not yet as popular as the services listed above, Peacock and Paramount+ were included in this analysis for two reasons: first, because they are broadcast TV’s answer to streaming video; second, because they represent the likely future direction for streaming video as media conglomerates look for ways to monetize their vast video libraries and rebundle content.

Read the full report at: https://www.parentstv.org/campaigns/dollars-and-sense-a-parents-guide-to-streaming-media.