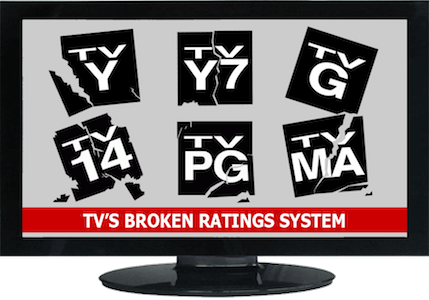 LOS ANGELES (May 28, 2019) – In a letter to the TV Parental Guidelines Monitoring Board Chairman Michael Powell, the Parents Television Council called on the board to “immediately implement the bold improvements to the ratings system and its oversight” that were recommended by the FCC in its recently-released report and by the PTC and other experts.

The full text of the letter, dated May 23, 2019, from PTC President Tim Winter to Mr. Powell is as follows:

Last week the FCC released its Report on the Television Content Ratings System and Oversight Monitoring Board, MB Docket No. 19-41. The FCC Report echoes the concerns and recommendations I sent to you, in your capacity as Chairman of TVOMB, in a letter almost five years ago.

During that five year period, the TVOMB, its leadership and its members have chosen to ignore, avoid, discount, criticize or refute the efforts of the Parents Television Council – as well as the individual and collective efforts of other media experts and family advocates – to make the ratings system and its oversight more accurate, consistent, transparent and publicly accountable. In the process, TVOMB’s efforts have resulted in a new generation of American children being exposed to graphic, explicit, toxic and age-inappropriate program content.

The FCC Report concluded that a better job could be done to align the rating system with the video content being shown; and that TVOMB has been insufficiently accessible and transparent to the public. Both findings should be sobering to those in the entertainment industry who rate the content and who sit on the oversight monitoring board. Equally as important in the Report were these twelve words from paragraph 35: “[W]e note the ratings system has not changed in over 20 years.”

We call on you as TVOMB Chair to immediately implement bold improvements to the ratings system and its oversight by adopting recommendations that we, the FCC, and other experts have proposed.

History suggests the industry members of TVOMB will resist any major efforts to bring greater transparency and accountability, and instead will likely just cherry-pick a recommendation or two from the FCC’s Report in order to placate federal officials, and to maintain as much of the status quo as they possibly can. But a tweak or two to the system will not suffice. Bold improvements are needed, and any effort to circumvent them will only validate our contention that the existing system serves the interests of Hollywood better than it serves the needs of parents.

The following improvements should be adopted and implemented immediately by TVOMB:

A symposium of pediatricians, children’s mental health experts, and child/family advocates should be convened to review the definitions of each age-based content rating (TV-Y7, TV-G, TV-14, etc.) in order to ensure that each rating category definition accurately and effectively reflects contemporary knowledge. International best practices should be considered and incorporated into this review.

Once definitions and guidelines for the age-based ratings can be evaluated and modernized, TVOMB should afford the symposium panel members an opportunity to screen an illustrative sampling of program content to ensure that the ratings accurately reflect their definitions.

Because the entertainment industry stands to benefit financially when content is inaccurately rated for younger audiences, and, therefore, to avoid any potential conflict of interest; TVOMB industry members should be permitted to offer their opinion, but not to alter the outcome of this independent review of the rating definitions and their application.

Every exhibitor and distributor should commit to airing a minimum number of public service announcements about the content ratings system. Most parents have never heard of TVOMB, and most have no idea it is their obligation to complain to TVOMB about a rating that they may find to be inaccurate. Furthermore, the PSAs should provide contact information and urge parents to communicate with TVOMB regarding any questions or concerns they might have. The mere existence of a TVOMB website and phone number provides absolutely zero value without public awareness.

The FCC’s Report rightly called for greater transparency in the ratings system’s oversight. We call on TVOMB to expand its member composition to create a more balanced weighting of industry, health experts and parental groups. More child psychologists, pediatricians, educators, and family advocacy groups should be added to the Board; and the “industry front groups” which currently hold a number of the family advocate seats should be removed. Formal terms, and term limits, should be applied to Board members to ensure that fresh perspectives are represented. Board member qualifications should be provided to the public. Meetings should be regularly scheduled, and open to the public and to the press; and clarity should be provided on the complaint and adjudication process.

Every effort should be made by TVOMB to bring more digital distribution platforms to the table. Their participation will help to implement one consistent content ratings system across the various methods that children consume their television programming in the 21st century. This would include the major independent players in the digital entertainment arena (e.g. Netflix, Amazon Prime, YouTube, etc.) as well as those that are owned or controlled by TVOMB members (CBS All Access, Disney+, Pluto TV etc.).

Michael, it is time for the TV content ratings system to reflect the realities of today’s entertainment media technologies. The NCTA changed its name to reflect the shifting media landscape; shouldn’t the content ratings system evolve as well? Please consider this special moment in time as an opportunity to bring bold, positive and comprehensive improvements to a 20-year old system, and to bring it into the 21st century. We stand ready and eager to help.