A Warning to Moms From a Mom: Cuties Is Even Worse Than We Were Led to Believe!

Kid Vid: Will the FCC Throw the Baby Out with the Deregulatory Bathwater? 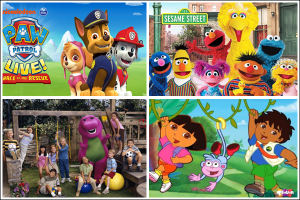 The Federal Communications Commission (FCC) recently announced that it would be undertaking an agency review of the so-called “Kid Vid Rules” that impose minimum educational and informational programming guidelines on television broadcasters.

Clearly the issue has struck a nerve with every point on the political spectrum, and for good reason. There is much at stake with this review and the numerous possible outcomes. I am pleased to offer this paper as an outline for discussion and as a summary of the position being taken by the Parents Television Council (PTC).

The PTC is a non-partisan, nonprofit organization whose mission is to protect children from the proven harm that comes from their exposure to graphic sex, violence and profanity in entertainment media. Our vision is for a safe and sound entertainment media landscape for children and families. More than 1.4 million Americans have joined the PTC since its creation in 1995.

It is reasonable and appropriate for the FCC to undertake a review of the Kid Vid Rules as part of its Congressionally-authorized regulatory oversight role. The current rules may not be perfect, so an improvement would benefit everyone. And a stated objective conveyed to me from an FCC staffer is that the review should offer greater certainty to broadcasters. That is also a noble and worthy objective.

But with that being said, it is deeply troubling that the Commission would first suggest an intention to review the rules with a blog post proclaiming the rules to be “burdensome,” “ineffective,” “unnecessary,” “stringent” and other conclusory wording that suggests the review is perfunctory and that the outcome has already been decided. I am reminded of the old television situation comedy Hogan’s Heroes, one episode of which featured the Gestapo major proclaiming that a prisoner “would be given a fair trial, after which he will be shot.”

If the FCC intends to undertake an honest review of the Kid Vid rules, the underlying public policies of the rules, and the implications of any rule changes to the public (and especially to children), then the review must not, cannot, begin by proclaiming the rules to be “ineffective and burdensome.” In fact, an honest review may very well conclude that the Kid Vid rules must be strengthened, not weakened; that there should be a regulatory requirement for more educational and informational programming, not less; and that a broadcaster’s obligation to abide by the rules are a fair consideration for their free use of the publicly-owned airwaves, not an imposition.

The Government’s Thumb is Already on the Scale:

The airwaves are public property. Broadcasters are given a license to use the airwaves for free in exchange for their pledge to serve the public interest. About a dozen years ago, FCC Commissioner Michael Copps’ Congressional testimony placed the value of our airwaves at half-a-trillion dollars -- and that was before the advent of the iPhone and the innumerable, ubiquitous smart phone applications that most Americans now enjoy. If the objective of the FCC is truly to deregulate, and if broadcasters are unhappy with the public interest obligations placed on them, then broadcasters should be invited to pay cash to the U.S. Treasury for the fair market value of their broadcast licenses.

In his book Abandoned in the Wasteland: Children, Television and the First Amendment, former FCC Chairman Newton Minow offered these sage words: “[T]he public interest requires us to put our children first. Left to the marketplace, children will receive either very bad service or none at all.”

I worked at a television station for a number of years, and I shared an office suite with staffers who were tasked with FCC filings; so I have witnessed first-hand how simple quarterly reporting actually is. Yes, it may be annoying to produce reports, and it may be inconvenient; but it is hardly burdensome, especially in light of the immense value received in the form of using the public airwaves for free. Today, many FCC filings are routinely handled by outsourced companies hired by TV station group owners.

The FCC’s blog post questioned the need for quarterly reporting; but the sad reality is that, barring the requirement for public accountability via reporting, many broadcasters would simply ignore the rules. Perhaps the FCC review will result in recommended improvements to the reporting procedure, and we would certainly welcome such a change. But the elimination of quarterly FCC reporting should not even be on the table for consideration.

By law, there is to be no indecent programming on the public airwaves between 6:00 a.m. and 10:00 p.m. The complaints offered by broadcasters opposed to the Kid Vid rules are substantially similar to the complaints they offered during legal challenges to the FCC’s broadcast indecency oversight. If broadcasters are able to wage a successful attack on Kid Vid rules, they most assuredly will wage the very same attack on indecency rules. This would be a catastrophic blow, especially to the millions of Americans who rely solely on broadcast television, as well as to today’s already increasingly-toxic entertainment media culture.

Disturbing Comparisons to Other Media Platforms

The FCC blog posting cited cable, satellite and digital media platforms as evidence why broadcasters should have no Kid Vid obligations. This analysis is greatly troubling. In order to get kid-centric programming on Nickelodeon, Disney or other networks, subscribers must also pay for profane, grotesquely violent and pornographic programming on networks like FX, Vice and USA. There is no ability for a parent to select which networks they want to purchase and bring into their homes. And opening the door to kid programming on HBO necessitates opening the door to the pornographic content that comes later in the program day.

In order to watch child-friendly programming on Netflix, parents must also pay for graphic sex, violence and profanity on the mature programming Netflix produces. In order to watch kid-themed content on YouTube, explicit and age-inappropriate content is only a mouse-click or two away.

Facebook poses unique dangers. Activist shareholders of Apple have recently called for the company to make its products less addictive to children. They cited research from schoolteachers that showed many children no longer go outside to play during recess, instead opting to review their social media accounts while seated at their desks. And with smart phones comes easy reach of hardcore pornography.

Ironically, the FCC blog post also cites kid-centric PBS programming as proof that Kid Vid rules are no longer needed. I use the word “ironically” because the same day that the FCC announced its intention to conduct the Kid Vid review, the White House delivered a proposed 2019 budget to Capitol Hill that had stripped PBS of its funding.

Over the years I have sat in a Las Vegas conference hall at the annual National Association of Broadcasters (NAB) convention and listened to the eloquent speeches of its CEO, former Senator Gordon Smith, as he proclaims the merits of the uniquely pervasive broadcast medium. Senator Smith has spoken accurately of the reliance on broadcast from those communities that are economically disadvantaged, many of which are minority communities. Any weakening of the Kid Vid rules would negatively and disproportionately impact poor and minority communities across the nation, many of whom are unable to afford cable or satellite television subscriptions, high-speed internet connections, tablets or smart phones, etc. Those children most in need of educational/informational programming are least able to afford alternatives to broadcast television.

The reality, and the sole reason why there is any conversation at all about Kid Vid rules, is that broadcasters would prefer to make more money by running something else instead of E/I programming for children. A sampling of early-morning weekend programming in Los Angeles suggests that stations would replace educational/informational shows with paid programming that touts the removal of unwanted body hair, or the benefits of membership in the automobile club, or a car wax that can undergo 50 car washes and still bead water, or expert tips on buying and selling real estate with no money down.

What is that slot worth? Based upon my research in Los Angeles (the #2 US market), a 30-second commercial at 7:00 a.m. on a Saturday morning sells for about $70-$80, net of sales commission. With 12-16 commercial avails to sell during the show, that means a 30-minute program could fetch about $1,000 in revenue for a local TV station in the L.A. market. Smaller markets would fetch less, perhaps just pennies on the dollar; but at least it provides a metric for comparison.

The FCC’s blog post cites the potential for depressed values of broadcast stations as one reason why Kid Vid rules might be burdensome. Even if annualized, the above revenue figures are a drop in the bucket compared to the value the station is reaping by the free use of the public airwaves. But more importantly, the FCC should not and must not be in the business of increasing the value of broadcasting companies.

The FCC blog post also suggests that West coast broadcast stations are burdened because they cannot air early sports broadcasts from the East coast. If the FCC intends to argue that Kid Vid broadcast rules are not needed because of kids programming on cable, then they cannot rely on a specious argument about sports programming when so many sports networks are included in the basic cable bundle.

Perhaps any change to the Kid Vid rules would include a requirement for broadcasters to air original local programming. But broadcasters would likely object to this requirement due to the high cost to produce it and the relatively low revenue values at that time of day. It is cheaper and easier to run infomercials, and that is the likely outcome if Kid Vid rules are weakened.

The FCC blog post rightly notes that superb program content like Schoolhouse Rock does not qualify under E/I guidelines. Perhaps that should be reconsidered, and the guidelines improved.

The FCC blog post concludes by saying that “[a]t the very least, there are substantial portions of these rules that can be rolled back or reconsidered.”

OK, fair enough; but we must not throw the baby out with the deregulatory bathwater.