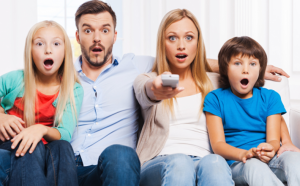 “It is ironic that legislation first passed in the 21st century needs to be brought into the 21st century, but that is exactly what the Family Movie Act Clarification Act will do. This bill is a long-overdue update to the Family Movie Act of 2005 and would give parents the digital ability to plug their kids’ ears and cover their kids’ eyes to harmful and explicit streaming content, just as the 2005 Act allows them to do via a DVD. We applaud Congresswoman Mia Love for recognizing the need for the law to catch up with technology in order to better serve parents,” said PTC President Tim Winter.

“Based on stories I’ve heard from inside the beltway, Love and the bill’s cosponsors deserve combat valor medals for weathering an intense, scorched-earth effort by Hollywood lobbyists working to prevent even the introduction of this bill, let alone its consideration. “But why would Hollywood studios object to legislation that would allow their films to make more money? They have claimed that digital filtering is akin to piracy, but there is no piracy taking place. Parents are only skipping past the objectionable content of movies they’ve purchased and are watching in the comfort of their own homes. The studios raised the same arguments over a dozen years ago when the Family Movie Act of 2005 was being considered. Those arguments were hollow then, and they are hollow now. The only plausible reason why anyone in Hollywood would be opposed to this measure is that some sort of agenda would be obviated by the consumer. “Make no mistake: this is a win-win for Hollywood and for parents. Families would be able to protect their children from harmful content in movies they stream; and Hollywood immediately increases its revenue capacity by broadening the marketplace for its products. Any publicly-traded studio that opposes either the spirit or the letter of this legislation is acting against its own fiduciary interests and, therefore, violating its corporate duty to shareholders. “We call on congressional leadership, both in the House and in the Senate, to deliver a Christmas present to parents and families, and pass H.R. 6816 before the end of this year.”